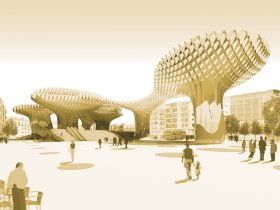 Metropol Parasol is the new icon project for Sevilla-Spain by J.MAYER H.

The Forum (Le Forum): 13 Volumes Cleverly Assembled In One Big Puzzle At The Middle Of The Site

Located in Saint-Louis (Alsace, France) in the “Three Borders” region and in the inner suburb of Basel, the Forum dedicated to replace the old “Palais des fêtes” of the town, is a cultural facility designed to host associative, sporting and cultural events.

The land, vast enough, is located close to the city center of Saint-Louis in an area mixing different scales and uses: it remains a residential area mainly made up of low height houses mingled with some characterless large-sized collective buildings, but it also includes offi ces and workshops for small companies, as well as a kindergarten and a primary school.

The project has been designed to fi t between these different built scales, in the smoothest possible way, by trying to minimize the breaks. The program also involves strong contrasts between reception/offi ces/lockers spaces which required small-sized volumes, and the Festival Hall and the Great Hall, the two main spaces of the project which are requiring substantially greater volumes.

Thus, between the relatively heterogeneous nature of the site and the one as well heterogeneous of the program elements, it was essential to work on a play with progressive volumes that could interconnect with each other while displaying the two key programs.

The project is then made of several distinct volumes, linked up to one another in a way the smaller volumes are placed at the edge of the individual houses, and the more imposing ones placed at the center. At the end there are 13 volumes connected to each other gathered at the center of the site, like the pieces of one single puzzle in this work of compactness and articulation with the environment.

They all fi t in a unique writing because they are all covered with the same principles of forms, materials and openings. The roof of each volume is then systematically made of two slopes, inspired by the design of the roofs you can observe in the surroundings, alternating the orientation of the folded faces sometimes North-South, sometimes South-West, in order to capture a light each time different. The expanded metal (©Métal Déployé), used as a cladding on all the facades, also contributes to this unity, and gives the project its originality.

The project thus plays constantly with a double scale: One of fractioning that links the Forum with its urban context, and one of homogeneity that gives the building a strong and iconic design.