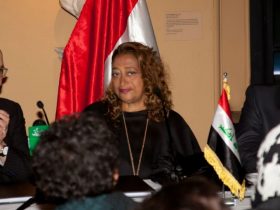 An Organic skyscraper proposal named The Endless City in Height designed by SURE Architecture wins the first prize in London Organic Skyscraper competition.

The City in height is an alternative to the usual design of skyscrapers. Rather than superimposing one floor on top of another without real continuity; our project is thought as two endless ramps circumrotating continually and rising gradually with a low gradient from the ground floor to the sky. London’s streets can now be developed both horizontally and vertically in a continuous way.

There is no break anymore, neither between the streets level and the skyscraper, nor between the skyscraper floors themselves. The goal of the design is to conceive an open building that is effective as an inviting and yet powerful symbol in all directions while being permeated by generosity and openness.

The different programs of the Tech City are settled continuously along the two ramps. They face each other, and are linked with bridges, interweave mutually in a dynamic vertical and horizontal movement to increase exchanges, communications and interactions. The differentiated but interconnected spatial sequences of public spaces and, entertainment spaces create a lively, discussion-rich setting for conversations, and societal inter-action and at the same time permit the creation of the vertical city.

Movement, views and relations in the site manifest themselves clearly as essential parameters to develop the architectural production. The entrance into the building is characterized by continuous spatial concentration and directed visual relations. Spatial development and materiality define the path that leads from the public area into the heart of the building.

The irregular ramps way create a variety of space and atmosphere. People discover the Tech City when they walk up the slopes through commercial and vibrating streets, innovative and technologic spaces, huge parks or public places which communicate with auditorium, inside or outside areas, dynamic exchange places or intimate quiet areas. A mix complex and rich system like a real city.

This vertical city comprises of various plazas with individual character to create high pedestrian movement throughout the tower. From the most public to the most private of spaces, the area allows for a spectacular view of the building.
Movement, spaces and light manifest themselves clearly as important and essential players in the overall production; providing the visitor a visually exciting environment, and a transition to the future.

Addressing the sustainable issues, programs and parts of the City in height share and exchange ideas, energy, water, waste with each other, hence making up an ecosystem. Losses are minimized while reuses are optimized. The skyscraper shape itself is designed to maximize passive energy and reduce artificial lighting, ventilation and cooling needs. There will be less energy we need to produce!

Skyscraper is also shaped by local constraints and orientation, contracted at the bottom to keep distance with nearest buildings and dilated at the top to let in natural light. Attention has been given to the slopes setting to facilitate access and communications between the skyscraper and the City of London. The City in height moves toward the main axes A10 and Shoreditch street leading to downtown London.

Six structural steel tubes support the two ramps and enclose the vertical flux (people, energy, waste, water and prefabricated modular steel elements). These elements are directly assembled on the top of the building to extend vertically the six pillars and allow the skyscraper growth with a green site. To concentrate structure and vertical flux allows open plans and flexible spaces which can be adapted to a wide range of programs.
Each firm, shop and institution recognizable from their own facade can settle and evolve according to its needs. The rich variety of materials and textures reflects mixture of the City in height. The London Skyline, and this organic skyscraper as a part of it, will transform, evolve and grow continuously together.