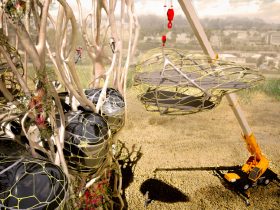 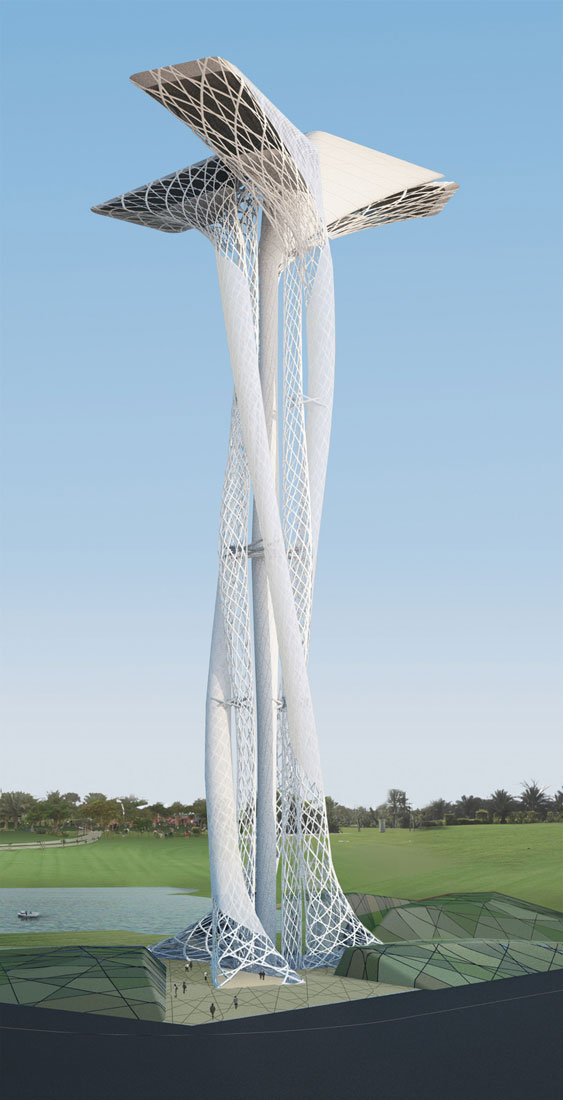 XTEN Architecture proposal for the ThyssenKrupp Elevator Competition in Dubai.

The Observation Tower is located in a cultural park “Zaabeel Park”,  just off axis from the main skyscraper boulevard in Dubai, Sheikh Khalifa Bin Zayed Road.

‘The site plan for the Za’abeel Park Observation (ZPO) Tower is organized according to a traditional Islamic geometric pattern found in the regions’ decorative arts. At the scale of the plaza, this pattern takes the form of the granite paving, lines of grass, flowers and trees, and a ribbon of water that draws one in and through the base of the ZPO Tower. This same pattern at a larger scale delineates four distinct landforms around the base of the tower, creating different pathways and approaches to the base as well as providing required program spaces for parking, conference center, children’s library and service areas. A flexible conference center for one hundred persons is located along a pathway to the North of the tower, with access to the lake, Za’abeel Park and a garage located within a second landform. A Children’s Library is located in a smaller landform adjacent to the main tower entry, and a fourth landform shielding the site from highway traffic is provided for mechanical and service spaces.

The Islamic pattern is rendered in different grasses and plantings at a larger scale over these landforms, with the intention that they are accessible for the public to climb upon and to sit to watch the crowds or the lights of the tower above. The landforms serve to both frame and guide the activity around the entry points to the tower and also to create a gradual transition between the scale of the ZPO Tower and the larger Za’abeel Park as it extends to the North and West.

The intention is for the ZPO Tower to be built as a net zero energy tower. Several hundred square meters of thin film photovoltaic solar will clad the horizontal planes of the upper petal roofs and the Southern, Western and Eastern exposures of the tower. The main program areas are located beneath landforms with green roofs to reduce solar gain. Geothermal cooling and ventilation will serve these program areas. All the water used on the site will be recycled, and the majority of the building materials will come from recycled sources. Estimates are that the solar energy alone will generate enough electricity to illuminate and power the building. 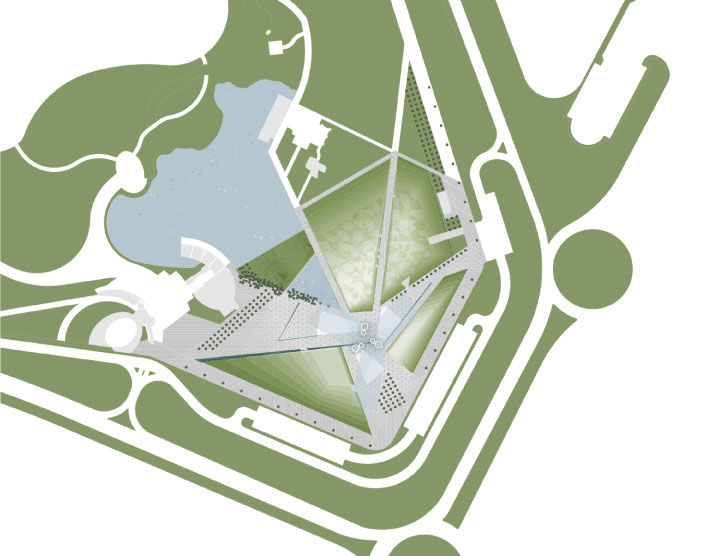 The ZPO Tower has been developed in plan, sections and elevation with reference to both the Islamic pattern developed in the site planning and the geometric qualities of certain desert flowers native to the region. There are six tubes set in a 30m diameter, with three inner tubes and three outer tubes. The inner tubes comprise the circulation system for the tower; one containing the elevators, one containing an open stair and one containing an enclosed, fire-rated emergency egress stair. These three inner tubes are shaped according to their function and also to provide lateral structural support for the dynamic configuration of the three outer tubes.ഊThe three outer tubes are articulated to describe a 270-degree rotation around an invisible cylinder defined by the original Islamic pattern. At the base the tubes open and expand into ‘petals’ of open air steel structure with a continuous cladding of monocrystalline solar panels at the Southern and Western exposures. As the three outer tubes rise they begin to open and expand into larger petals that cantilever out 70m in each direction at the top of the tower. Inside these upper petals are dramatic spaces that contain a café and six interconnected indoor and outdoor observation deck areas on two levels.

The structure of this tower is comprised of a steel diagrid system, interlaced with additional steel members that follow the lines from the pattern at plaza level of the site. The intention is that the structural pattern, derived from traditional Islamic patterns, becomes the expression of the ZPO Tower. At times this structural pattern may be more open as building loads are dispersed, and at times they may be so dense that they resemble the traditional mashrabiyya screens found in the regional architecture. This braced frame structure is laterally reinforced every 30m by horizontal diaphragms connecting between three and six tubes in any one instance. 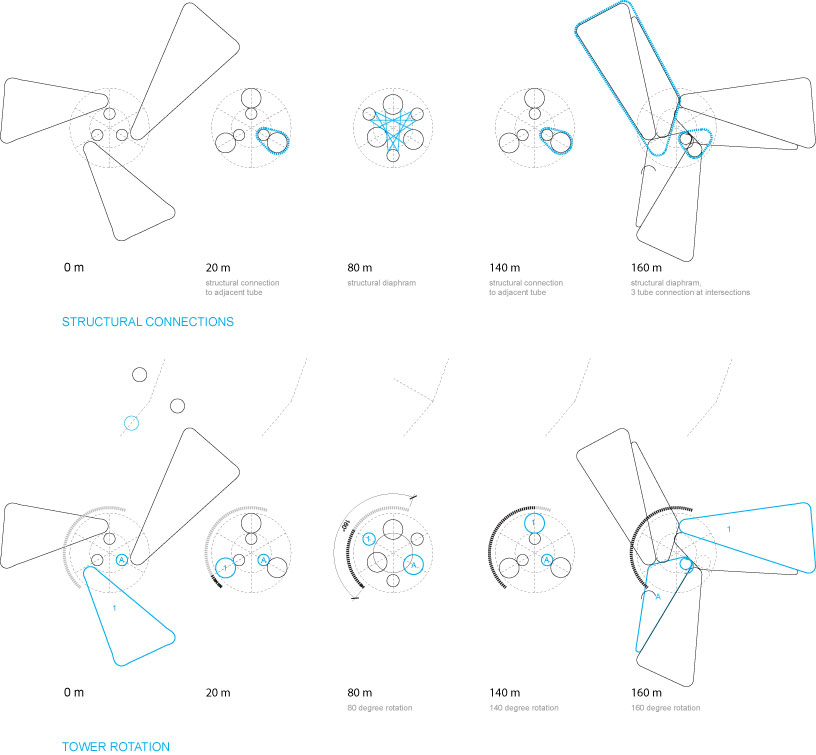 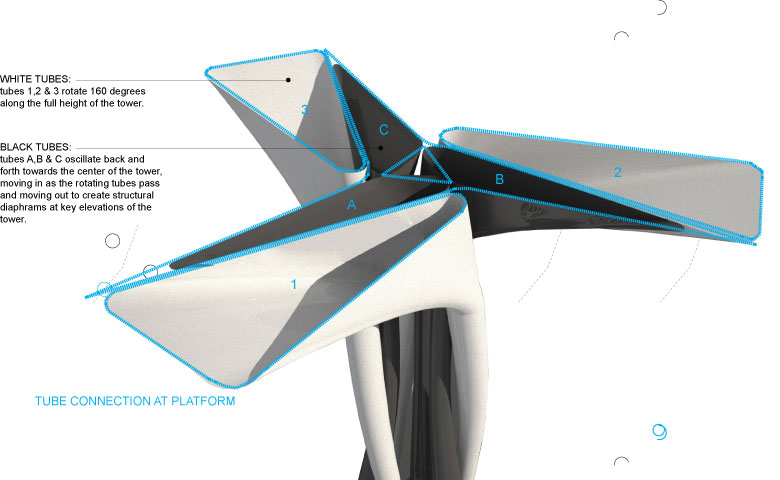 At the base and top transitions bent moment frames support the horizontal diaphragms. The geometric organization of the tower results in a form that naturally sheds wind and allows it to pass through and around the aerodynamic upper forms. An 8m diameter wind dampening mass is located at the center of the upper tower to further compensate for any wind loads. The petals at the top of the tower are oriented towards specific views and directions that resonate with both the past and future of Dubai. The first petal is aligned with Mecca, to the Southwest of the project site. Moving clockwise at the top of the ZPO Tower, the second petal is directed toward the old town of Deira, a neighborhood of traditional souks, mosques, old fortress walls and wind towers. From the observation deck in the third petal of the tower one surveys the changing skyline along Sheikh Khalifa Bin Zayed Road.