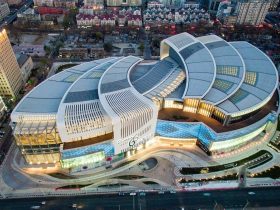 Emergent – Los Angeles architects:  have won a competition to design a sports centre and arena for the 12th National Games of the People’s Republic of China, to be held in Liaoning in 2013. 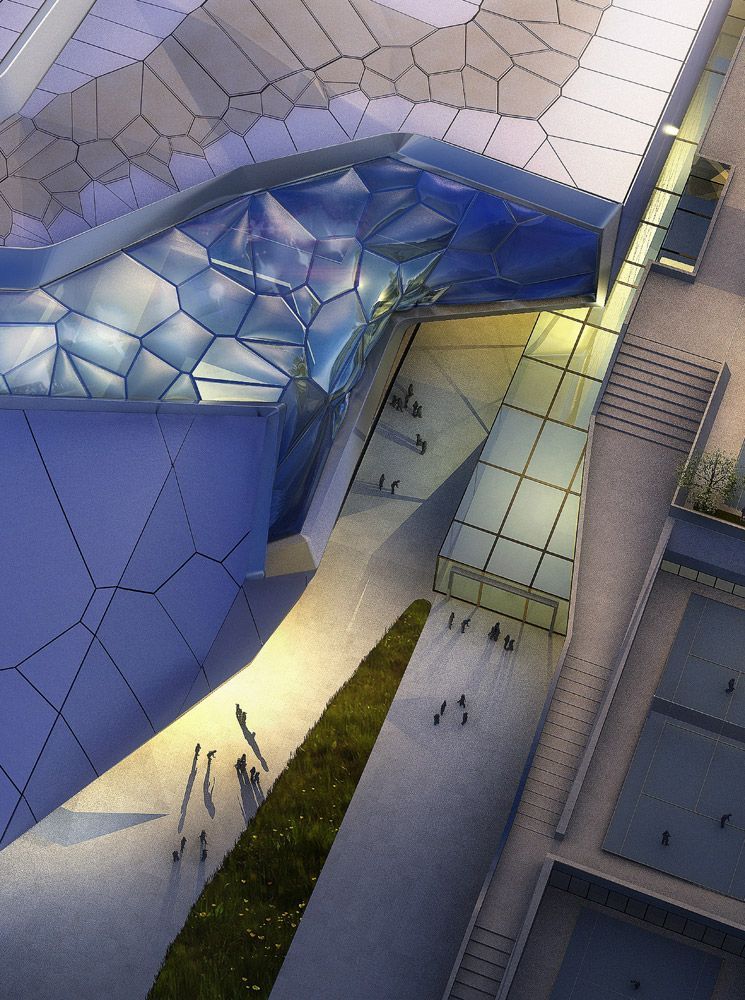 The Civic Sports Center and 2013 National Games Arena in Shenyang will comprise an arena with 2000 fixed seats, a swimming arena and civic sports centre. 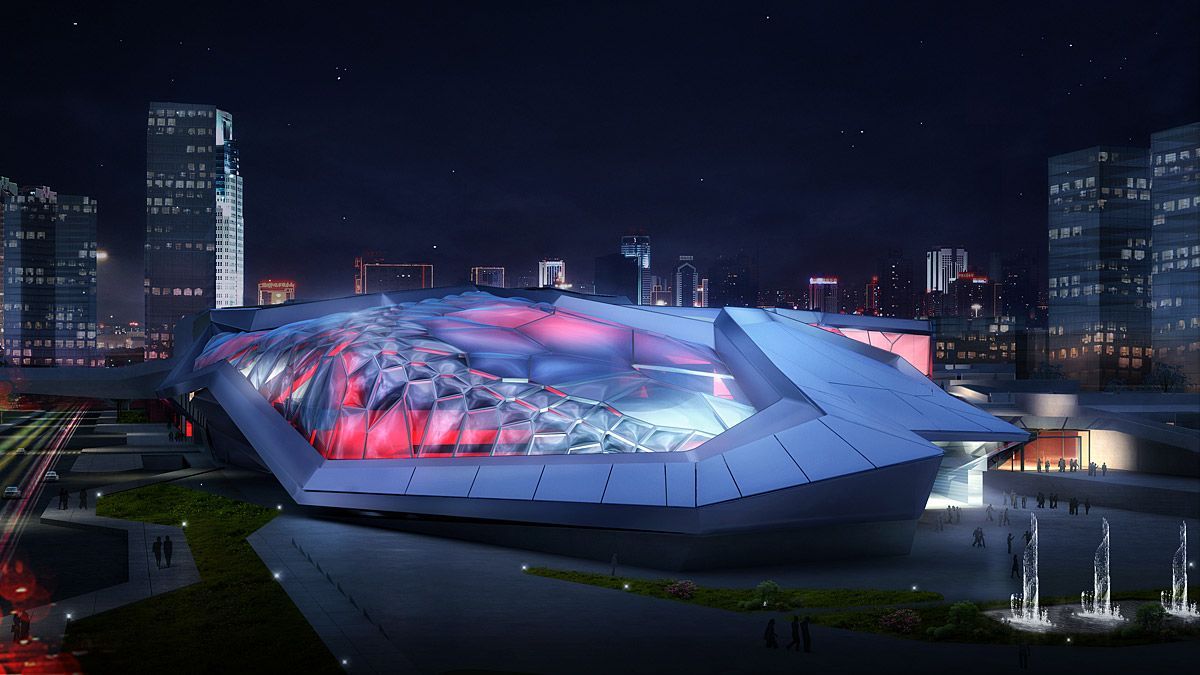 A roof with cellular windows and solar panels will cover the different areas with a form derived from natural crystal formations. 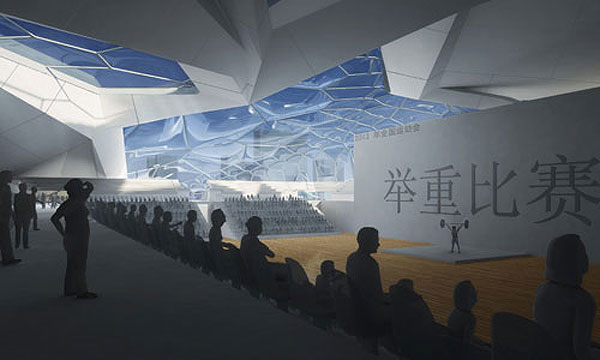 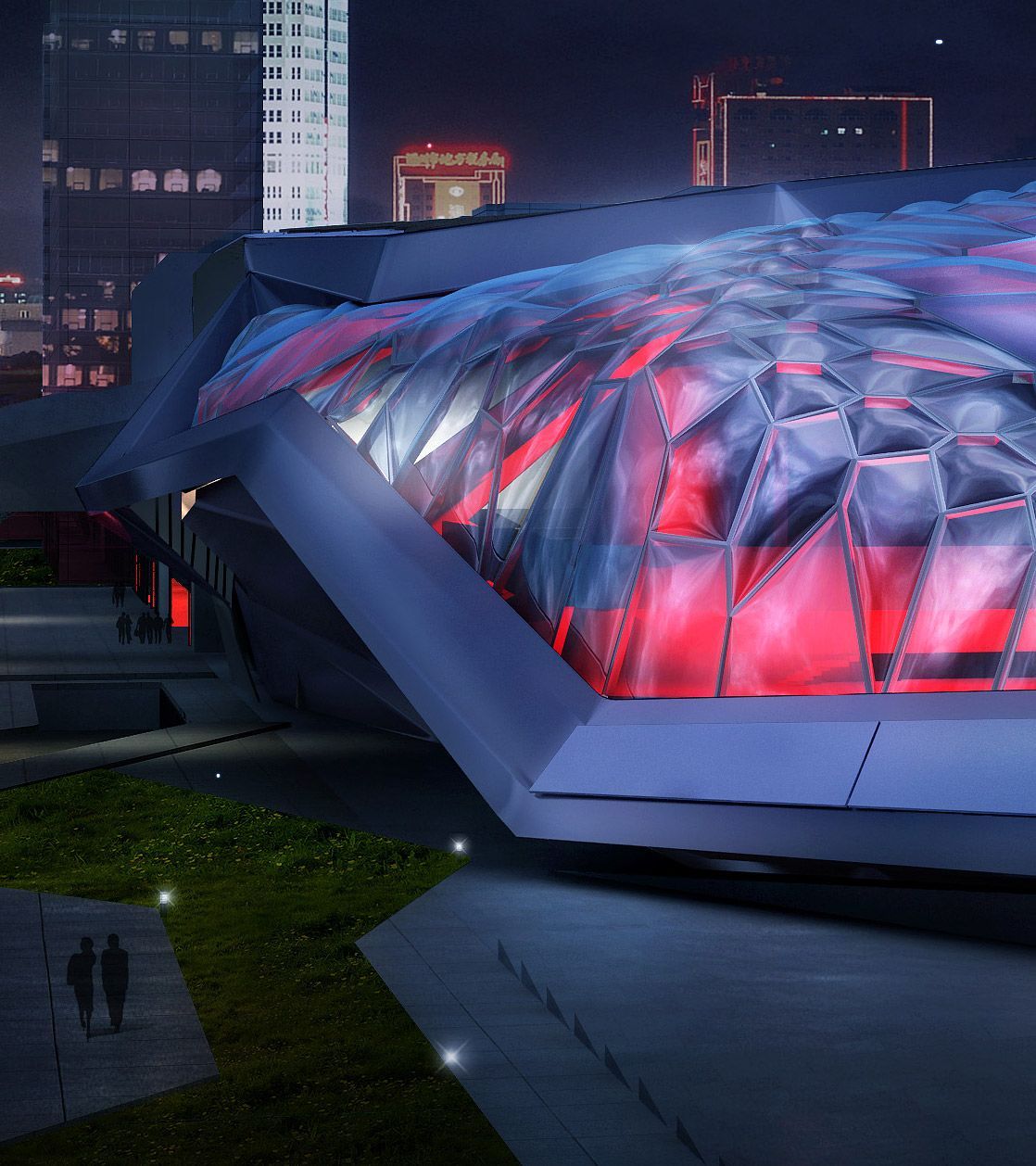 The site for this project is located at the heart of downtown Shenyang. Adjacent to Zhongshan Park, it is a connector between the natural and urban life of the city, making it a perfect location for a sports complex and for a National Games Arena.Our project is based on creating an artificial landscape for sports activities while also creating an icon for the Games. The roof of the Civic Recreation Center and Swimming Arena are interconnected to make this continuous, differentiated sports landscape connecting Park to city with cascading sports fields, pathways, and open space. This landscape features Soccer fields, basketball courts, tennis, badminton, and volleyball courts at various levels.

The National Games Arena is located on the West end of the site– an iconic figure against the relaxed background of the sports landscape. This building is a symbol of both the Games and the new status of Shenyang as a top-ten Chinese provincial capital and international city. The architecture is based on crystal patterning found in nature at all scales. The design features large membrane bubble windows with views out to the Park and the city. The patterning of the windows spreads out onto the metal panel facades of the building, erupting as zones of solar panels on the roof.

The National Games Arena building has its main entry from the Civic Square, but it can also be entered via bridges from the sports landscape on various levels. The arena is designed for 2,000 fixed seats above the mezzanine level and 2,000 removable seats below. With the lower seats removed, massive events can be held in the 40M x 70M space such as NBA games, Disney on Ice, international conferences, or rock concerts. The other sports functions in the building such as basketball, volleyball, and badminton courts are arranged like a gymnasium rather than in separate rooms. This also allows maximum flexibility of use.

These two buildings are combined into a lively multi-storey complex where people can engage in sports indoors at all times of the year. The Swimming Arena is located to the west end of the complex, nestled underneath the cascading sports landscape. All pools are contained within a grand open space making it a memorable and urban swimming experience. It can be entered either from the South Façade or from the Civic Square.

The recreation center is located adjacent to the Park, and has entries from the north, west, and south. It is organized by a passageway which connects the sides of the site together into a network. Sports activities are located on one of four levels, in clear groups for ease of orientation. Skylights daylight the interior spaces and offer views of people playing sports outside. Ground level functions such as galleries and restaurants cater to the general public, making the space a community center as much as a sports center.

The Recreation Center and Swimming Arenas will be constructed out of reinforced concrete frame and slab construction for economy. Certain areas such as the pools and large gaming courts will feature column-less spaces and increased beam depth. Other spaces will relax back into a 7M x 7M economical grid spacing. This column grid will be carried all the way down through the parking garage in the basement.

The National Games Arena will be constructed out of reinforced concrete, concrete walls, and steel frame. The long span roof will be made from deep sculptured beams which will be stabilized by interior armatures. These beams will also contain the mechanical systems of the space. The opaque skin of the building will be aluminum panel, featuring thin-film solar technology in roof areas. The transparent areas will be made of ETFE bubbles, which are pressurized with air. This system is extremely lightweight compared to glazing, and therefore requires minimal structure to support it. In order to reduce solar gain in summer and heat-loss in winter, we propose to exchange patches of the transparent ETFE bubbles with translucent bubbles consisting of multiple layers of ETFE insulated with aero gel or other high-performance insulation.