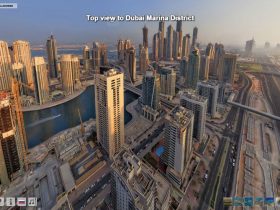 “Following a design competition IO has recently been awarded both the master plan of a 93 hectare waterfront CBD development and a new Cross Straits Forum in the island of Pingtan in China.”, says Gordon Affleck, Design Partner.

Pingtan is planned as a new commercial hub to drive communication and commercial trade between China and Taiwan. Part of the competition included the design of a new Cross Straits Forum including theatre, convention, exhibition and auxiliary commercial and cultural facilities.

At the centre of the CBD and Forum district has a newly created fresh water lake that conserves fresh water from run off through the urban grain.

The masterplan cater for some 3.3 million sqm of urban development, while the Cross Straits Forum would be in the first phase of development.

To reflect the aspiration of transparency and dialogue the buildings are formed by converging elements that combine with the landscape and waterfront to create a fluid and open series of public spaces that meld into the buildings themselves.

Service traffic, roads and trams are integrated into a series of terraced landscape levels to minimize impact of car traffic on pedestrian circulation routes and to create free access from the central axial park canal through the lake towards the waterfront through a series of leisure and retail lined canals.