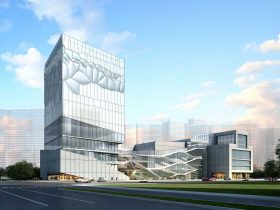 Organic and Natural structure – Blobitecture give us a Bionic Tower designed by LAVA.

Architect’s statement
The bionic tower proposes a naturally occurring system of structural organization that generates a building embodying efficiencies found within natural structures and architecture. The proposed façade also envisions an intelligent automation of surface to address pragmatic issues such as ventilation, solar access and water collection. In the same nature envisions organic regeneration, so to the building proposes a natural system of organic structure and organization.

Structure and ornament
There is a unity between structure, space and architectural expression, similar to cathedrals, and any natural system. Learning from nature and advanced computing enables us to conceive structures of incredible lightness, efficiency and elegance. The intelligence of the smallest unit results in the intelligence of the overall system. By parametric modelling of a behavioural logic the system is constantly optimized. The whole is greater than the sum of its parts. New materials and technologies enable adaptability, responsiveness, environmental awareness and strength. Instead if an array of individual elements the building behaves like an organism or ecosystem. The building systems and skin are controlled and react to external influences like air pressure, temperature, humidity, air pollution and solar radiation.

Intelligence of the System
Architecture of the future is not about the shape but about the intelligence of the system. No building skin today approaches the performance of the biological world. The traditional curtain wall facade is passive, lacking the power to adjust to the fluctuating external environment. It should be able to intervene actively in the buildings struggle to maintain its internal stability. Architecture has to perform as an ecosystem within the organic tissue of the city.