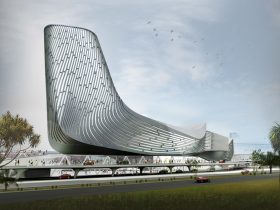 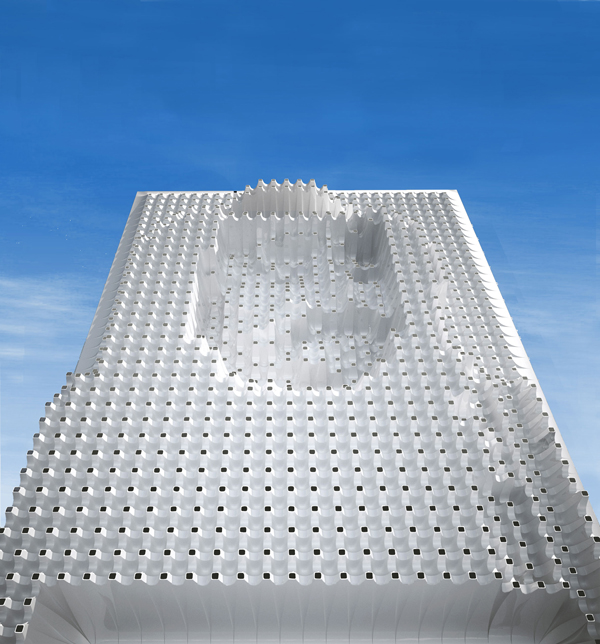 Leah Nichols has designed a “gateway” tower for Abu Dhabi that attempts to both embody and aggravate the idea that architecture is a site for the projection of political power and commercial gain.

Taking a cue from the omnipresence of Sheikh Khalifa bin Zayed Al Nahyan’s image, – which is scattered throughout the region on large-scale, American-style billboards – the project embraces the typology of the billboard in order to meet the programmatic needs of a gateway to Saadiyat Island. The proposal considers how a building is perceived by drivers on the highway and attempts to successfully engage viewers through the articulation of a two-sided surface that communicates the single image of Sheikh Khalifa – acting as a site marker similar to U.S. state welcome signage. Made up of 1400 protruding apertures, the building’s exterior skin translates depth onto a second internal skin read from the opposite side or direction of the highway.  These double skins, along with a glazing wall encased in structural framing, make up the layers of this seemingly superflat form.  The collective layers create an interiorized spatial condition, while the exterior provides visible states of change from multiple directions throughout the day. Therefore, the image typically applied to architecture becomes embedded in the architecture itself.

Billboard Archtiecture was designed as part of the advanced Exotic Variables and States of Change studio led by Thom Faulders at the California College of the Arts. The challenge presented to the students was to examine emerging pattern models that would allow for growth and adaptive response, enabling them to explore process-driven territories and architectures of exaggeration. This approach allowed for an extension to current practices of environmental engagement to include exotic possibilities and novel formations, gained through artful entanglement and irregular conditions – pushing beyond simplistic notions of functionalism and economy.