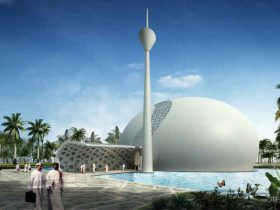 Parametric curves for the Cafe interior design in Moscow revolves around the contrast between emerging and classic interior design. The new part deforms and mergers traditional space of the cafe creating new conditions and spaces.

The existing interior tissue is being inflected in the center space by an emerging structure which develops and distributes itself in the available space. The remains of the parasitized space resist this process by mixing two different sensations thus creating a new one. This ongoing process perfectly describes how the geometry performs the role of a parasite.

The counter, made of molded polished wood with black leather, represents the new cafe and serves as a centerpiece for the place. From the entrance point, it spreads around the room allowing for an agreeable arrangement of tables. On the left, bar stools rise elegantly from the counter to support natural body curves.The ceiling is a flexible shape epitomizing weightlessness and movement-branching elements fill the space and let the two styles fuse together. Merging with the classic interior parts, it forms drops of transparent plastic that create an organic feel and become a recognizable new feature.