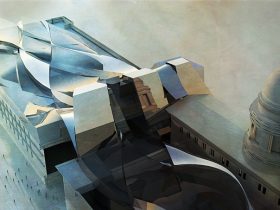 ANIMA, the first project in Italy by Bernard Tschumi Architects, Commissioned by the Fondazione Cassa di Risparmio di Ascoli Piceno and by the Municipality of Grottammare, it is placed at the fringes of the urban fabric, between the sea and hills that characterize the landscape, the building is clearly visible and immediately accessible from the Adriatic highway. The spatial design is characterized by an exceptional flexibility, floor areas, structural systems, and vertical movement (stairs, elevators) organized in such a way that changing demands can be accommodated.

From the Architects: The town of Grottammare and the nearby communities, together with a local foundation, have decided to create a special facility with a 1,500-seat multi-purpose auditorium (the Main Room), combined with a 250- to 400-seat meeting room, together with educational, exhibition, and recreation spaces. With its location close to the sea and its direct connection to the highway, A.N.I.M.A. can be a major regional activator. Rather than resorting to convoluted volumes to arrive at some now predictable extravagance, Bernard Tschumi Architects designed the ANIMA building around two clear ideas orconcepts.

First, we wanted the interior of the building to read as a small town of sorts, and to generate unexpectedevents through its plazas and cortili. Second, we aimed at a simple exterior, with four vertical perimeter walls or facciate, hence investigating the concept of “facades” instead ofenvelopes in this project.

On the inside, we made the plan like an ideal square (72×72 meters) with the Main Room in the middle. By rotating the Main Room slightly, we generated a sequence of four trapezoidal courts, or cortili, places of social encounters and gatherings. On the outside, we anchored the fourfacciate of the ideal square firmly into the ground and proceeded to carve openings into each, according to orientation and use. By being abstract and figurative at the same time, we avoided conventional façade composition, giving a strong and creative presence to the ANIMA building. The image of both the front facade and the fifth facade (the roof) is a work-in-progress and will evolve with further technical studies.

Together, our two concepts of cortileinterior and facciata exterior result in a building both simple and with a striking presence. It pays homage to major contributions from the Italian cultural identity, in particular for the front facade to Pericle Fazzini, a major artist from Grottammare.