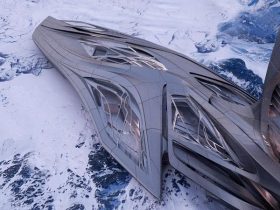 5 Ideas Shaping the Future of Architecture

Homemade Dessert has announced the winners of the War Port Microtecture competition.

Homemade Dessert has once again partnered with the City Council of Liepaja, Latvia to initiate a design competition targeted at revitalising the coastal Latvian town of Karosta – an early-20th-century Russian military headquarters-turned Soviet naval base, vacated by its population of 20,000 following the fall of the Soviet Union in the 1990s. This specific call for designs sought ideas for transforming small-scale-architectural elements at the heart of Karosta’s community, namely, its playgrounds, bus stops, benches and signage structures.

This competition series serves as a forum for the discussion of Karosta, a town which boasts several unique examples of military architecture and planning, by which it holds historical significance, drawing artists and other visitors. Its distinctive building stock includes a prison, military bunkers, Soviet-era housing blocks and a man-made warship canal. The ideas generated by the Homemade Dessert competitions are intended to stimulate wider interest in the town of Karosta and to aid in reversing the town’s disrepair.

Both Homemade Dessert and the City Council of Liepaja would like to thank those who responded to this third international call for ideas focused on re-thinking Karosta’s micro-urban elements. A total of USD$2000 has been awarded to three winning entries.

Check out the winning entries below:

The winning proposal was chosen for its simplicity and effectiveness. Colourful, ready-to-assemble blocks of concrete are amassed to satisfy the demands of the common bench, playground, bust stop and signage post. The repeating concrete unit promises a dynamic range of colour patterns and formal arrangements that embody the characteristics of local handicraft and architecture. The submission was considered by the jury to be most successful for its flexibility, for its potential to connect various community amenities and transform Karosta’s shared spaces into playgrounds for the young and old.

Chosen for its link to context and for its large-scale vision, this design entry intelligently re-uses the existing Soviet-era housing blocks to form new and smaller community spaces. The Brutalist residential structures, many of which are vacant and perhaps beyond repair, are dismantled and dispersed throughout Karosta as inhabitable sculptures. As with Bernard Tschumi’s well-known Parc de la Villette in Paris, these structures form new frames for cultural interaction and serve as reference points, although this version is more clearly tied to historical relationships.

A New Identity for Karosta

The jury was pleased by the submission’s clear concept. Various micro structures are built using repeated elements arranged to dematerialise, thereby combining the strength of steel with transparency and lightness – a nod to the lasting strength of a community despite change. This concept of resilience is further expressed by the material choice of Corten steel, a building element known to weather over time. As with the other winners, the proposal offers a consistent formal and material language which serves to connect the many shared spaces of Karosta.