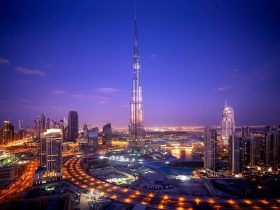 With a focused look at sustainability, the Hong Kong-based architecture firm lO has been developing a series of research projects aimed at improving the quality of the built environment. One project, the Indigo Tower, takes an active stance and addresses the problem of urban pollution by helping purify the air of our cities through a combination of passive solar techniques and advanced nanotechnology.

The high-rise tower pulls dirt, grease and bacteria out of the air. The cleansing reaction is triggered by the use of a nano coating of titanium dioxide (TiO2) on the outer skin of the tower. TiO2 is a very strong oxidation agent triggered by a photocatalyst reaction.

The tower will be a glowing indigo object at night varying in intensity according to the amount of solar energy collected during the day. The indigo glow will become symbolic of the 24-hour cleansing; counteracting the haze that often dominates more and more cities around the world.

The tower is split into three bars to increase the amount of surface area, provide southern light to the south face of each bar, and focus and increase wind speed. The added surface area allows for maximizing the amount of titanium dioxide that can be placed on the building—enhancing the amount of air being cleaned. The focused and increased wind speeds maximize the amount of air pushed across the titanium dioxide panels, provide cross ventilation for every unit in the towers, and power a series of vertical wind turbines. Positive pressure is created on the southern face of the towers and the resulting negative pressure on the northern façades creates optimal conditions for cross-ventilation. Careful attention has also been placed to prevent the backflow air from one unit into another. The nano coating has the added benefit of neutralizing bacteriological contamination.

The skin design is inspired by the pocketed and cellular texture of the TiO2 molecule. A series of organic cells cover the building and are tapered to naturally collect the water, a byproduct of the skin’s chemical reaction, and to collect and slowly release rainwater.

The skin pulls off of the building on the south façades to provide natural shading and pushes into the inner skin of the north façade to maximize daylight.

It is paramount to have the plants help maintain the base-level carbon neutrality. A large pool around the base of the tower is the final collection point of the filtered water, which goes to support a large amount of animal and plant life. Water is also pumped back up the towers from the pool to service toilets. Furthermore, the pool at the base acts as a heat sink for the release of the heat generated from a back-up air-conditioning system. Here, the heat is released slowly, thus helps reduce the heat island effect.

If all the buildings in a central business district followed the indigo technology, airborne pollution could be drastically reduced by up to 80 percent. Mere neutrality is not enough—new buildings must work together to enhance the quality of the physical environment. The lO team is currently working with manufacturers to construct a mockup of the skin for further testing.

The research projects are used as a means to advance sustainable designs within the firm and the results are often incorporated directly into current projects. Beyond the obvious environmental benefits, lO has realized the commercial value of advanced green technology. The sustainable technologies are catching on especially well in large-scale residential projects because they bring a better value to the individual units and gain tax credit from local governments.