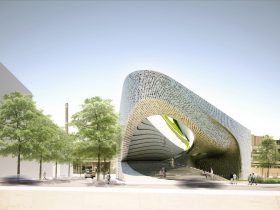 “Athletic Ripples” is a project based on interfacing the user and his built environment into a coherent whole. The program has been translated into trajectories of movement. These flow lines generated the formal idea which is underlined by interweaving of the various activities. This results in creating a design with an inherent quality of interaction.

The program analysis resulted in the distribution of the various functions on site. Conceptually these programmatic zones were treated as pebbled dropped in water. It is the inference of the water field, thus creating ripples giving a guideline for the formal design language of the project. The central pedestrian zone caters for the primary movement on site. This linear zone has been kept exclusively for the pedestrians, thereby instilling the feeling of being in a green sports complex. It has been attempted to eliminate the dogma of vehicular congestion related to projects like this. This corridor being axial in nature branches into different activities. The program asks for a stadium which accommodates cricket pitch, football ground and an athletics running track. Along with this function a number of indoor outdoor sports activities are located on site as required by the brief.

A continuous silhouette has been designed for the project. The design proposal seems to be emerging from the landscape and creates the various forms still keeping an overall gesture. As a design outlook it has been taken into account that being a sports complex an atmosphere of being nested in nature is created. The built form does not sit in disjunction with the surroundings, but on the contrary flows out of the landscape itself. Piezoelectricity is being looked to be applied on the landscape pavers. The system will harvest the kinetic energy generated by crowds that effective in areas of heavy foot traffic. Solar cells are proposed for the roof of the stadiums to harness the abundantly available solar energy. These solar cells would be integrated on the roof of the stadium as a design feature and only a certain percent of the roof panels will be designed as solar panels. There is a proposed mix of solar panels and pneumatic panels on the roof to maintain the required light intensity inside the stadium.