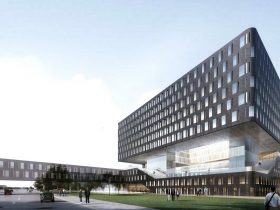 Millions are following in this precise moment one of the most important weddings of the last few years. Officially, Prince William and Kate Middleton are now husband and wife. Watching the Royal Wedding, I think many of you said: “What is that ugly old-fashioned Royal Carriage they are in? I think they need a new one”.Reza Esmaeeli, an architect and designer currently working at Zaha Hadid Architects in London, apparently thought so, and decided to design a new Royal Wedding Carriage !

The forthcoming Royal Wedding perhaps will be the most important or at least the most talked-about event in UK, in 2011. And no doubt that the most memorable part of this fascinating ceremony, for the people of England, will be the wedding procession; most importantly the appearance of prince and princess in public: their dress and their car or traditionally their carriage.

Whereas the bride’s dress seems to be the hottest topic in the World Wide Web, what comes as a surprise to me is that there is no talk or thought about her carriage, and it looks like it is well-accepted that the bride and the groom should always be seen in the same conventional carriage; but why? Why shouldn’t their carriage actually be the most dazzling and glamorous part of their wedding? Can’t we actually picture the carriage in any different way?

I envision the carriage differently. I imagine it like a fairy tale; like a shining bird, a super-fictional transparent globe with a ceremonial tail; something that converts the wedding to a subversive cultural event; a carriage that people of Britain will long talk about: a cutting-edge professionally designed vehicle from which prince and princess will wave hands for them; a romantic magical entity which will fill their hearts forever.

We are in a country which has the most avant-garde designers in Europe. It is worldwide known for its progressive design firms, and has a well-developed construction industry, which it exports to the entire world. Why not to use the best of it? Why shouldn’t the royal carriage be something that shows off all of it?

Just close your eyes and envision a carriage with a sphere-shape glass car, fabricated by British high-end glass manufacturers. It has an elegant curved long tail made from glass-reinforced plastic, and could potentially accommodate a light purpose-made engine to give it a duel functionality in case the journey is long; all in white and decorated with flower-shape patterns and engravings.

Will it be very costly? Maybe not; maybe there won’t be too less of possibility to find manufacturers, designers, and producers who would be willing to contribute, to promote their products and their companies in such a unique occasion.

In this carriage that represents the modern era in which we live, the bride and the groom could whether sit in the car and relax, or push the button, let their bird open up its wings, make their way to the ceremonial platform incorporated in the tail, and wave hands for the audience and be photographed. Could it be any more romantic? Wouldn’t you love to go and see how the tail of princess’ dress is blended into the tail of her carriage? Wouldn’t that then be more like the prince and princess of our fairy tales?

Thanks to: Panagiota A. Goutsou