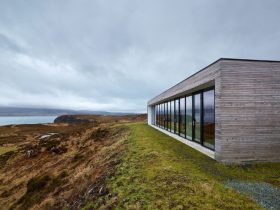 The Future Project of the Year award at the World Architecture Festival 2013 has been given to a museum for China‘s National Maritime Museum, proposed in Tianjin, designed by Cox Rayner Architects.

Cox Rayner Architects has won the international architecture competition to design this significant national Chinese project. For some 80 worldwide architects, 8 were selected to compete, with 3 chosen as finalists.

The competition took 6 months of grueling effort over its two stages, including several interim presentations in China to gain progressive feedback and to refine the schemes.

The 3 finalists were Cox Rayner, EMBT (Miralles-Tagliabue) of Spain, and the South China Institute of Technology.

The Museum is to be developed in Tianjin, China’s fourth largest city (22 million), and the major port city for northern China. It is about 100 kilometres east of Beijing. The Museum is sited on a bay with a large parkland forming part of the project. It will be 80,000 square metres and construction cost is estimated at AUD $290 million. Exhibition fitout is to be another AUD $80 million.