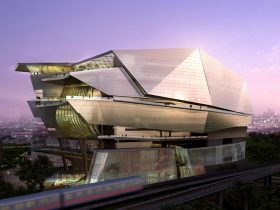 Memorial To The RTS (Radio-Television Of Serbia) Employees Perished During The NATO Bombing.

„No man is an island, Entire of itself. Each is a piece of the continent, A part of the main.
If a clod be washed away by the sea, Europe is the less,
As well as if a promontory were. As well as if a manor of thine own Or of thine friend’s were.
Each man’s death diminishes me, For I am involved in mankind.
Therefore, send not to know For whom the bell tolls,
It tolls for thee.“

This project wants to pay homage to the victims in the bombing of the RTS building, and all the victims of the bombing by NATO on Serbia. Such a decision is best illustrated by the new facade that extends from the existing building contour, or what remains of it. The facade is 3 dimensionally deconstructed to give the idea of collapsing of the old facade, and its bending over the public in front of it, splitting in the same time in 2 parts that are separated by glass, which gives light to the interior but also alludes to the tragedy.

The impression, stopping under the building, is that it tilts and falls over us. Imagining the explosion of the bomb, the author’s imagination was to show that the explosion gave rise to spikes as a result of the bombing, and precisely 16 of them in number, as the number of victims in the RTS building, and assigns names of the victims to each one. Spikes are witnesses of the event, which will always remind us.

The intention is not to place the spines on the square level, but to make them spring from the intimate basement space. In this space, relatives and friends of the victims can be at peace, perceiving the spikes flashing to the sky.

At the first level (ground) are organized the info desk, the ticket office, the cloakroom and utility rooms. All upper levels (4) are exhibit spaces. The levels are linked by an elevator and the stairs, which are in the same place as the old ones. The stairs and their structure are born from the old ones,symbolizing the bridge that connects us to the time before the bombing.

The west terrace becomes an open theater and multimedia performance stage. The new facility, the terrace and the square are joined by ramps, making the space usable to people with special needs. They also connect the space dynamically and symbolize a crack in the ground.

The first draft was reflected by the intimate experience of this whole tragedy. Eventually, the sketch transformed into a monument to the victims. Associations that prosecuted the author, were related to the grayness of the air-planes and bombs, which he tried to transfer to the project materials.The gray color of concrete and metal in all its meanings.