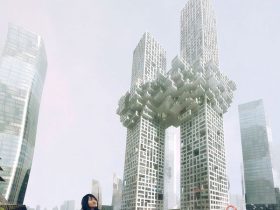 Jewel …Something that has value -Rio de Janeiro, Brazil

Jewel – a person or thing that is treasured, esteemed, or indispensable. An ornamental structural piece, that conveys an “international style”. Back then ornament was forbidden, here ornament is encouraged. However, the ornament is not to define the program, but a way to show expression. In essence, anurban identity.

There has been a prevailing way to build in South America, in which people do not want to move into. It is essential to break the traditional form of homogeneous, suburban-like social housing into one that represents the specific context and residents’ identity.

In the current events of gentrification, due to the World Cup and Olympics, I am aiming to minimize displacement of those who live in these favelas, while attempting to better the conditions in the area. I believe that favelas shouldn’t be viewed as cancers to cities and society, but rather treasured. The favelas should be seen as a vertical neighborhood as a way to signify permanence and to influence the surrounding neighborhoods.

As for my intervention, I did not want to design the typical high-rise building, but instead use what is already there in the favelas – stacked unit blocks. I do not intend to the favela again, but to draw on its values, principles and strategies in the design process. It is essential to understand the complexities and eventually draw on the characteristics that give the favelas their qualities and uniqueness. This subsidized housing, The Jewel, is to last as a monument, but to remain flexible.

Growing up in San Francisco, Chisom Ezekwo had a passion for maths and science. She completed a Bachelor of Architecture and Bachelor of Science in Public Policy, Planning and Management at the University of Southern California, followed by a Masters at Columbia University, New York, in 2014. Her work examines Brazilian favelas. ‘I would use architecture to inspire others to initiate positive changes in today’s cities and villages,’ she says. Would most like to work for: Rem Koolhaas.
Tags: Brazil Housing international style New York ornament Rio de Janeiro
Share on
Share on Facebook Share on Twitter Share on Pinterest Share on WhatsApp Share on WhatsApp Share on Email