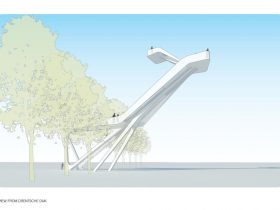 HAO has been commissioned to create an idea proposal for the regenerated use of the Domino Sugar Factory in Brooklyn, NY.

The Domino Sugar Factory is situated on the East River waterfront in Williamsburg, Brooklyn. Now abandoned, the original factory dates back to 1856 and was once the epicenter of sugar processing in the US. Since closing in 2004, the site and its buildings have stood empty.

The proposal for the Domino Culture Factory seeks to promote the regeneration of the existing factory buildings creating a world-class cultural destination combining public and private programming. Sponsored by Williamsburg Independent People, a local community group advocating a program focused on public uses for the site, the proposal offers a counterpoint to the residential-office development currently proposed.

Divided into two general zones the project encompasses a green energy technology center, educational, community and hotel-driven programming to the south with publicly accessible private museum space, exhibition and theater space to the north. The entire site is accessible to the public; buildings are linked together by large green areas and a new waterfront boardwalk and sculpture park. A marina along with a planned ferry stop emphasizes the site’s unique waterfront location and creates the first of a series of planned ferry stops that link together a variety of outer borough cultural destinations.

The buildings are retrofitted with a combination of publicly accessible green roofs and photovoltaic roof panels, which, along with geothermal heating and cooling and the use of wind and wave energy, will help the site achieve a greatly reduced carbon footprint.

“With the proposal for the Domino Sugar Factory we wanted to look at alternate programming ideas for the site. Based on models like the Tate Modern and the 798 Art District in Beijing, we explored possibilities that would open up the site and create a vibrant, mixed, cultural destination. We believe that, like those institutions, the Domino Sugar Factory has the potential to become a world-class global cultural destination, attracting millions of visitors every year while creating a sustainable way of revitalizing the Williamsburg neighbourhood”.