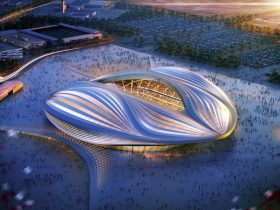 Zaha Hadid fires back at claims that Qatar stadium like a vagina!

Daegu Gosan Public Library – The Future Of A Library

A library should provide a dynamic space that facilitates the interactions between people and information. It must provide flexibility to accommodate the evolving ways in which people access and interact with information. The new Daegu Gosan Public Library will provide a cultural meeting place in the community by providing an open, multi-media focused facility for the public. It is the place for culture, the exchange of ideas and the access of information.

Creating a new cultural hub will be an opportunity to breathe new life into the district and attract all members of the community. It will thus create a node of urban focus in the Susenong-Gu urban fabric. The character of the building is logical and open. It generates a spatial hierarchy that allows the user to easily understand the function and arrangement of spaces. It radiates order and calms for the community and the user.

The library will become a public citizen by collecting and focusing the public and at the same time radiating information and ideas out into the consciousness of the community. It becomes a member of society whose purpose is to serve and inspire.

The building uses the maximum footprint allowed (60%) to and maintains a contextual height. It provides 40% of the site for public gathering space. The building is sited towards the park to activate public space in the north and south. In this way, the building does not ignore the south of the site. Instead, it engages the park and at the same time provides benefit to the buildings to the south.  Overhanging floor plates provide relief from the weather and generating a human scale open space that will act as reception spaces for all the students from schools situated south area. East and West side are understood as big sidewalks that ensure good pedestrian connections around the building. The building anchors to the greenbelt of Shinmae-Dong road, generating diverse cultural activities around it and providing a cultural destination.

Building form comes from the merge of two parameters: programmatic efficiency and contextual urban volumetric relationships. The program is separated into two main bodies that are spatially connected through the open atrium. Glazing and louvers provide the building envelope and compliment the ordered rhythm of the triangulated skylights that illuminate the interior space. The mass of the building is linear and closed to the east and west, where the program is located, and it is open at its fullest on north and south facades, generating an internal connection between the front park and the back square.To the north and south, the building shape is extended or retracted to create covered public spaces, entrances, address the best views, and context to make making it visible from the main street and direct the view of the user to the surroundings.

The Library is organized to be open in the plan. Maximizing open space and visual interaction, the program is located in two long bars which are spread apart to create a central atrium and separate spaces based on programmatic necessity. The program is also organized from more public and dynamic to more private and quiet, from the ground floor to the top floor. Classrooms and Multi-purpose room will work as an independent area from the Library, having different access.

The building structure is solved by two different systems. Main volumes are supported by a grid of steel columns covering span in a range between 5.5 to 10.5m. North and south facades, because of its cantilevered areas above the main entrances requires triangulated trusses structural system.Roof span is covered by a triangulated skylight system, supported by columns at the wall.

Daegu Gosan Library facade has been designed to respond both programmatic visual requirement and interior light levels. Using a 2-meter module, the facade East and west facades are completely covered by a series of vertical aluminum profiles that protect the library from the direct sun coming from that orientation as well create a diffuse perception of the surroundings. North and south facades show themselves more open allowing seen interior spaces to understand building function and permeability feeling at the same time that casts the best light.