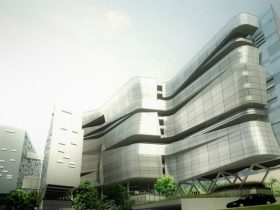 The Cube-shaped Mosque, or masjid, is the spiritual center of the King Abdullah Petroleum Studies and Research Center’s residential development.

This residential community supports KAPSARC’s international staff and their families.

HOK was shaped the mosque like a cube clad with an Islamic pattern. A series of outdoor courtyards provide a formal progression toward the mosque, located in the middle of the site’s central green space. The courtyards have an axial alignment toward Mecca and the Kaaba.

Surrounded by a reflective pool, the mosque is elevated three feet above the adjacent outdoor spaces. This pool glows at night, creating the illusion that the building is levitating over water. Worshipers enter the mosque by climbing floating stone steps and traversing a glass bridge over the reflective pool.

As a monolithic core perforated with a pattern of glowing windows and surrounded by glass, the mosque’s appearance changes from day to night. During the day, the shadows from the complex mullion patterns travel over the inner stone facade, creating a dynamic experience that varies by season. At night, the glass box acts like a lantern washed with light at the bottom and punctuated with points of light near the top.

The interior is an interplay of shade and shadows, viewed through the lens and technological interpretation of a traditional mashrabiya screen wall. Wrapping all four walls and the ceiling, the screen glows with the natural light of the punched windows and skylights, creating a bright, modern interior. Layers of scale overlap on the mashrabiya walls, while the ceiling has a pure, traditional pattern.

Located adjacent to the mosque, the 115-foot-tall minaret tower mirrors the patterns of the mosque’s facade and facilitates the daily calls to prayer.