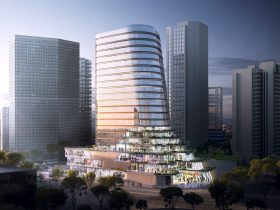 Aedas “Cloud on Terrace” Mixed Use Tower in the heart of Shanghai, China

From the inception of the Concrete House project; the client brief, existing house, and contextual setting were all factors to consider carefully before pursuing the extensive alteration and additions to a modest hillside house. From concept to documentation and ultimately implementation, the project was guided by this clear understanding.

Situated in Bedfordview, bordering a serene nature reserve, the altered house is perched on the steep face of the hillside, seemingly sliding down the hill. This nature informed the architectural concept and guiding principles behind the making of space and formation of the architecture: Rockface Extension. From a conceptual point of view, the architecture aims to act as an extension to the rocky hillside, with the occupants seemingly inhabiting a mountain face. This insertion/extension aims to deliver just that, as it is firmly rooted to the hillside through some impressive engineering, while also protruding out of the hillside as if it were shaped and morphed over time into its current condition.

The translation of the concept becomes evident upon entry and approach to the house, where the large 4.8m high and 3.6m wide 4-ton Cast-in-situ garage doors are a result of the clients brief and of the molded and chamfered shapes of the extruded edges, mimicking the shaping of the stone and the hillside.

The entrance courtyard is intended to resemble a portion of an excavation of the hillside, with large slabs of exposed aggregate paving fragmented with inlaid strip lights depicting the morse code translation of the client’s family name. This excavated portion is further enhanced with carving the entrance through the solid face into the interior (hillside). The material translation of the concept resulted in the dominant use of concrete as a material due to its mass, solidity, and firmness. This concrete hillside extension is further carved out and excavated,  resulting in various internal voids that are generated to form the various spaces required by the client’s program.

This overarching concept was critical in determining the treatment of spaces, rooms and linkages in-between. The use of concrete was offset and softened by the use of timber, enhanced with the implementation of marble and contrasted by mild steel elements, malleable ceilings and clear glass for filtering light into the house (into the hillside). This understanding and implementation were designed by M Square Lifestyle Design.

Upon entry  through the carved entrance and double volume foyer, the organization on this level is clear and distinct. The double volume foyer which forms an integral part in the circulation of the Concrete House, acting as the central spine for moving up and down, separates the service spaces from the entertainment spaces on this lower level. The entertainment spaces, comprised of a formal en secluded Cigar lounge and wine cellar resembling a cave in the hill, billiards room, barbecue area as well as an indoor swimming pool, rests discreetly below the main living areas. As the orientation of the house is North, this entire space connects  seamlessly to the garden with fully glazed folding doors. The double volume space enhances the conceptual notion of ‘carving and extending out of the hillside’.

The internal finishes reiterate the notion of privacy as well as the freedom that comes with entertainment, as Barrisol ceilings are implemented for uninterrupted lighting, Pandomo stucco wall finishes are applied to enhance the sophistication of the entertainment area, while oak paneling softens the palette considerably for a more relaxed environment.

The ground level follows a similar pattern as the lower level, in that the circulation core, comprised of a three-storey stairwell and lift shaft, clearly separates the private familial functions, gymnasium, study and home theater, from the more public spaces such as the bar, dining area, lounge, and kitchen, while the service spaces are excavated in the hillside. The public areas on this level are conceived  as an extension of the daily lives of the occupants, where open plan living, the interconnectedness of spaces and functions are important. From this large uninterrupted space, the views onto Johannesburg are generous and the aperture selection and placing of openings are carefully considered to enhance views, while adhering to the necessary control of sunlight. Ventilation of this space is critical as the lower level swimming pool is part of this volume, humidifying the space on warmer days. To regulate this, an intelligent skylight was installed to ventilate the spaces adequately.

The public living areas are emboldened by the use of neutral materials suiting the palette of the rest of the house, while softening it with the discreet use of oak and lighter finished materials. The gymnasium and other private spaces are carefully considered in their arrangement and placing, while the finishes implemented to suit the function of the space. Sculptures by Regardt van der Meulen have been used in the foyer as well as the dining room, giving an additional dimension to the architectural space.

To the south of the Concrete House, the location and consideration of an atrium space act as an invitation to nature while also granting access to the guest wing cut into the slope of the hill, extending the hillside. On the first floor, the private spaces of the house are organized around this courtyard/atrium space, with the main Suite situated to the North East, thereby absorbing most of the eastern morning sun and being shielded by the harsh western sun. The four children’s bedrooms are all considered and crafted specifically according to the clients brief, with each assuming its own character and language. These spaces, as formal and private as they are, seem less so due to its elevation, connection to the hillside and relationship between one another. Open balconies, atria, and external walkways afford the private  bedrooms and bathrooms the opportunity to breathe, thereby removing the sense of seclusion and ultimately affording the private spaces some freedom.

The context affords the occupants the generous opportunity of claiming a portion of the hillside for special occasions. The gazebo/boma space is accessed via a free-form concrete staircase, and elevated amongst the indigenous trees on the hillside, touching the earth lightly is a steel walkway. The gazebo is perched at a much higher level than the home, affording breathtaking views of the city of Johannesburg. This space seems to become part of the hillside, although not totally a cave, that spatial language eludes to this.

The Concrete House engages with a challenging context, while the architectural and interior approach to translating this place into space found its cues from this place, the result is strikingly beautiful. This house is a statement and testament to the contextualization of architecture, the enhancement of material technology and of a holistic understanding and implementation of making a house a home.

Thanks for reading! Leave us a comment below, and visit us again for more concrete home designs.