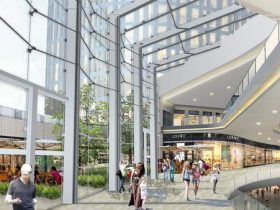 As time transcends the virtual and physical limits of tall buildings, their ability to mingle into the existing urban fabric and transform a city’s dynamic core becomes a fine line between the density and physical mass already embedded in the metropolis and the ingenious ability to create grandeur. We therefore only see fragments of the past and brave gestures of the future in the densification of urban cores. Each gesticulation becomes an expression – a murmur on the reality of what could be achieved.

To allow for true freedom of expression that allows complete indulgence concerning the interplay of form and structure we have to consider the rationale of building placement. Allowing buildings to set their footprint in avenues of un-built mass provides for urban renewal in areas of cities previously left as urban wasteland from decaying manufacturing.

In this frenzy of vertical ambition we have lost the true sense of identity. It is this sense of identity that transforms not only the microcosm of place but, how in turn an icon transcends into the destination for a city. The iconic landmark transforms itself over time and becomes of an emblem of a generation. The sense of ownership of this emblem comes not only from its footprint in the city but the iconic nature of its ability to be recognized.