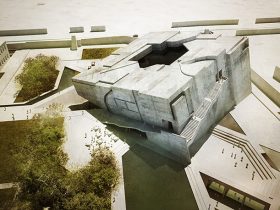 Mall of the World in Dubai: The first temperature-controlled city and the largest shopping mall in the world!ِِ

Dubai’s ruler Sheik Mohammed bin Rashid al-Maktoum has unveiled plans for the Mall of the World — a 48 million-sq.-ft. (4.5 million sq m) shopping center, to be the world’s largest, which will also form the world’s first temperature-controlled “city.”

Designed by developers Dubai Holding, the complex will be modeled on the cultural district around New York’s Broadway and Oxford Street in London, and is expected to draw 180 million visitors to the city annually — even during the sweltering 104°F (40°C) summer. (The complex will be opened to the elements during tamer winter months to allow fresh air to circulate.)

“The growth in family and retail tourism underpins the need to enhance Dubai’s tourism infrastructure as soon as possible,” Sheik Mohammed said in a statement. “This project complements our plans to transform Dubai into a cultural, tourist and economic hub for the 2 billion people living in the region around us; and we are determined to achieve our vision.”

The ambitious project will include the world’s largest indoor amusement park and shopping mall, 100 hotels and serviced apartment complexes, an entertainment center to host 15,000 people, and a 3 million-sq.-ft. (300,000 sq m) “wellness district” for medical tourism. Buildings in the city will be connected by promenades stretching 4.5 miles (7 km). The plan is Dubai’s latest attempt to mark itself as the economic hub of the Islamic world; the UAE’s most populous city already boasts the world’s tallest building, Burj Khalifa, which stands at 2,722 ft. (829.8 m).

In addition, as countries around the world struggle to reduce their greenhouse emissions, the project could lead the way for environmentally responsible urban planning. Ahmad bin Byat, chief executive officer of Dubai Holding, said in a statement that technology used will “reduce energy consumption and carbon footprint, ensuring high levels of environmental sustainability and operational efficiency.”

Mall of the World, a project developed by Dubai Holding, will have the following connected features:

The cost and timeline of the project have yet to be released, but it is expected to be a highlight at the UAE World Expo trade fair in 2020.

Mall of the Workd – Infographics:

Mall of the World – Video: