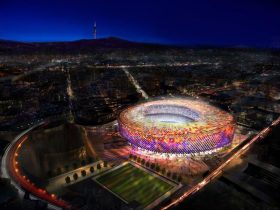 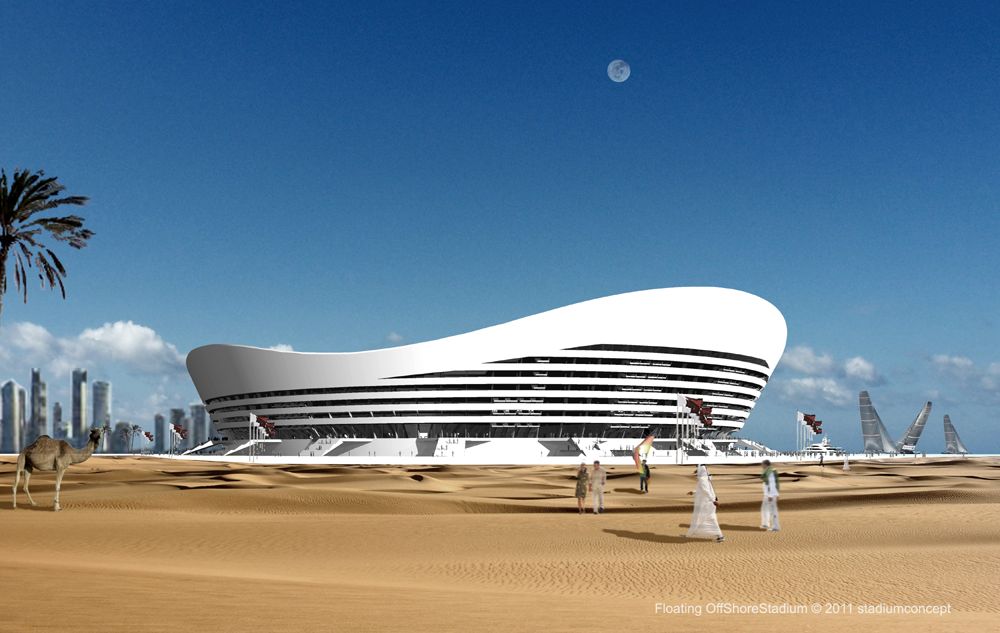 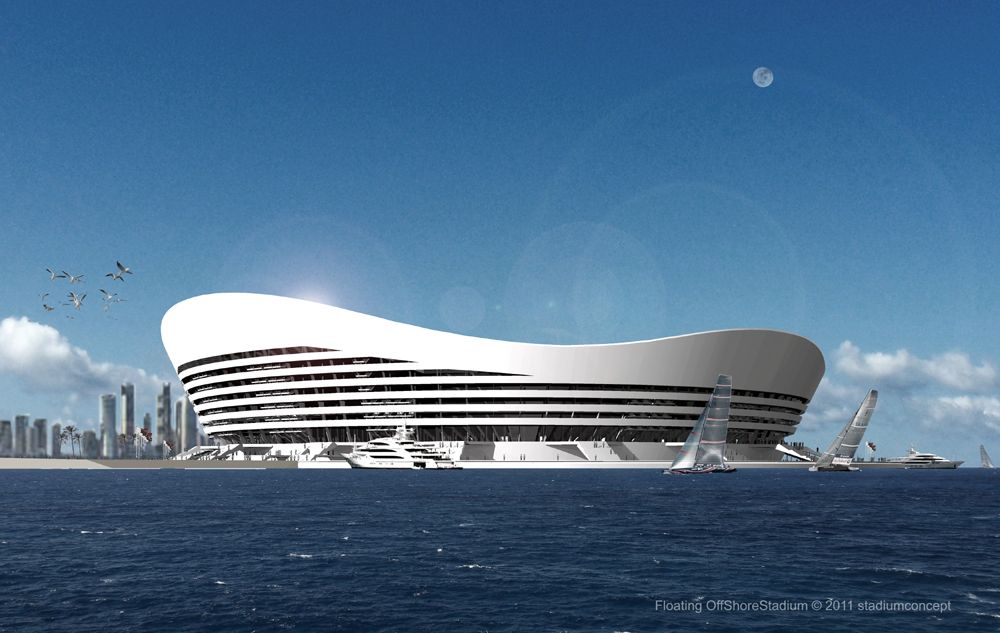 Due to its global mobility it can be utilised by far more effectively as traditional stadiums as it could serve for more than one, for example, FIFA tournament. By shipping to the next venue this concept offers a visionary way to maximise the utilisation of long-term investments without sacrificing the efficient use of energy resources – the Floating OffShore Stadium is eco-efficiently powered by a blend of hybrid energies such as water, wind and solar power.

Its mobility and multi-decade utilisation and overall eco-efficiency bring significant advantages over traditional, on-shore stadium concepts. This concept consequently offers new ways for enjoying permanent financial profits for investors over a long period of time and public stakeholders alike – but at least it is created to enjoy the people around the world. 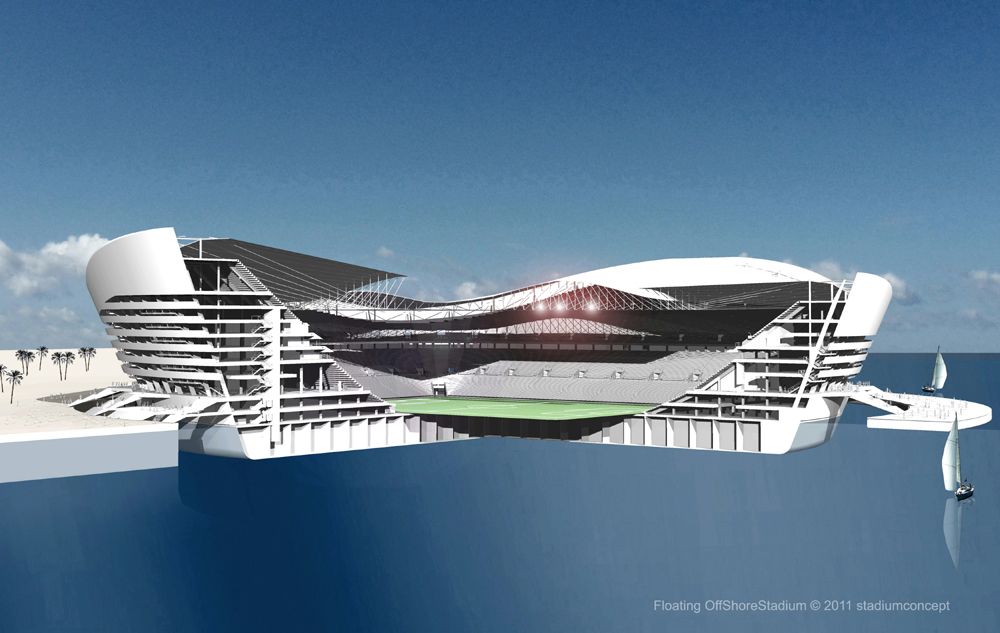 Following large events such as global football tournaments, many real-life cases such as in South Africa give rise to the conclusion that significant financial resources are unnecessarily wasted. This is due to redundant use or bad utilisation of the maximum capacity of the relevant stadiums which had been required for that specific event – but not for its secondary use. This creates significant economic disadvantages to mainly the taxpayer of the respective host country who has to finally carry all the fixed costs arising from empty, large-scale football stadiums. These stadiums are termed by the public as “White Elephants“.

Many investigating nations provide the developement of temporary and modular structures in order to optimize further use, e.g. reducing the future capacities for the local club to a reasonable level. This kind of solution usually raises the costs – depending on the stadium buildings geometry principles – and the sustainabilty effect is relatively small.

A multifunctional use of the arena by other sports, rock concerts and public events or the addition of compatible facilities like hotels, business lounges, conference venues, shopping centers, etc. are substitutional methods of re-financing and permanent use, but not to get to the roots-cause of the problem of international cup stadia. 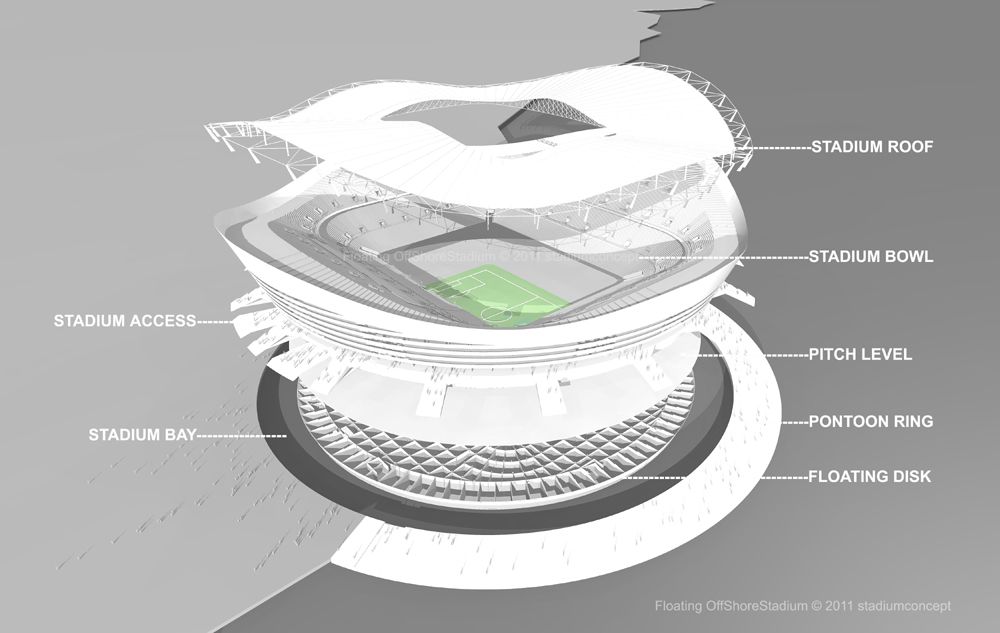 After more than a decade of planning football stadiums for FIFA World Cups and UEFA European Football Championships, we started to create a fundamentally new stadium concept for the next generation of international sports tournaments as well as for spectacular stadium events in general:

Considering the conceptual advantages we expect for the FIFA World Cups and continental tournaments high interest of relevant host nations, especially for the 2022 FIFA WC hosted by Qatar.

Taking into account that almost all potential host countries of international football final tournaments have access to the sea, this unique model opens the door to realise one of the most innovative and sustainable stadium concepts worldwide. It’s eco-efficiency and long-term utilization are unrivalled.

After a tournament the mobile stadium can be operated by the owner itself as well as rented to the next host nation and to footballclubs for permanent use all over the world (coastline countries).

The Floating OffShore Stadium is an elemantary ‘keep it simple’ innovation based on modern stadium geometries in order to meet all FIFA and UEFA requirements as well as international safety and comfort standards, f. e. as mentioned in the ‘Green Guide’ or the European Norm 13200 and on the newest engineering technolologies.

The general size and capacity of 65.000 seats is provided regarding the needs for FIFA World Cup openings and finals (national match capacity). Capacities from 33.000 seats (minimum UEFA standard) up to 88.000 seats are feasible, respecting the maximum viewing distance and a C-value of 90 mm. Regarding the sightlines, the viewing quality of the shown concept is more than 50% higher than the absolute minimum FIFA standard. The compact shape represents a cost-optimized design.

A rib structure of vertical frames and horizontal slabs forms the supporting structure (shipbuilding).The structural concept has to comply with the ground and the section shape.
A floating baseplate – constructed as a single piece or as connected elements – carries the stadium bowl. The floating body under the stadium (underwater part) has separated floats which allow the nivellement of the whole stadium.

For multifunctional use a closable roof can be implemented as utilized in common stadium buildings. The Floating OffShore Stadium is powered by high energy-efficient diesel engines which function switchable as heating and power stations (co-generation) as well as for moving the floating stadium. Transatlantic transfer is alternatively supported by tow- or pushboats.

For shallow water basins at the coastline a low floating bottom is provided, so the costs for required local infrastructure will be minimised.