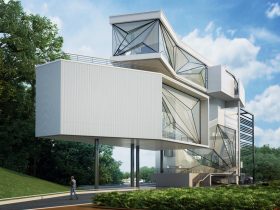 With a population density of 130,000 people per square kilometre, Mongkok, a neighbourhood in Hong Kong, is one of the most densely populated places on the planet. Aedas was appointed to design a serviced apartment building in this hyperdense district, whose construction work commenced recently.

Standing on a site of 614 square metres, which is challengingly small, the building will offer serviced apartment accommodation to occupants. In the early post-war years, it was common to create illegal iron balconies for residential units in Mongkok to acquire maximum view. Aedas reinterpreted these structures in a modern way, using irregular protrusions to create unobstructed views for each apartment.

Inspired by the home gardens which people create on the balconies, Aedas designed a green wall that seemingly protrudes from the solid façade of the podium to further connect the building with the historical cityscape. This green wall will also enhance the quality of life for the neighbourhood by increasing the provision of greenery at the pedestrian level.

The building is set back from the street to allow more opportunities for planting, which creates a breathing space in the middle of the dense neighborhood and provides rare greenery. It also transforms the outdoor landscape space into an urban backdrop for the building’s public areas such as an entrance lobby on the ground level and a transit lift lobby on the second floor.

The design sets an example of contemporary interpretation of traditional architecture.