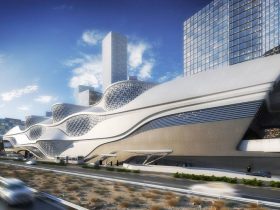 The design for the Brussels Airport Connector Building focuses on providing a highly efficient, flexible infrastructural element that connects to and negotiates the existing airport architecture. The connector is part of the future ambition of the Brussels Airport to create a European hub in Brussels. The design approach ensures cohesive functioning of the three buildings, with the Connector Building establishing a seamless connection between the two contrasting identities of the terminal and Pier A, whilst simultaneously creating its own new identity.

The Connector incorporates logistical efficiency in handling passenger flows, security and operational processes. Additionally, opportunities for commercial activity are maximised with the newly expanded, double-storey commercial area of the Connector, creating a fully-integrated retail zone as the main programmatic spine. The post-screening area with fast duty-free shopping and a horizontal organisation gradually morphs into a double-height central plaza housing the main cafe, from where the high-end boutique stores begin. Surrounding the central plaza is the elevated Cockpit – the highest occupiable point of the Connector with a light cafe boasting the best views of the bustling plaza and shopping area below, as well as the fleeting fields of airplanes outside.